Hold the Cow. How Breakthrough Plant-Based Alternatives Are Rapidly Taking Over Your Diary Aisle 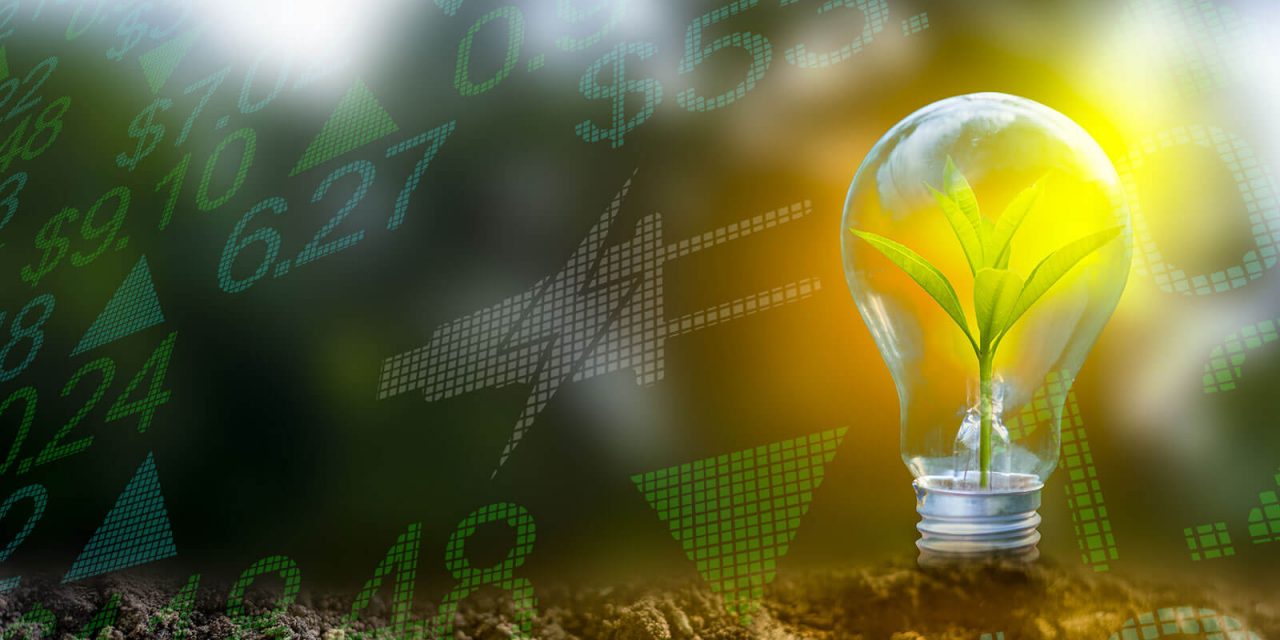 Life sails on regardless of us.

What could be the best creamy yogurt on the planet is made from cashews, not cows.

Now, investors are catching on.

This sudden disruption is due to massive and growing consumer demand.

Demand Is The Key To Every Winning Investment Strategy

And that’s why trend investors need to take an in-depth look now at this up-and-coming company.

This company has award winning products that are part of what’s currently a fast expanding $20 billion global alternative dairy revolution.2

And it’s not hyperbole to call the alternative dairy market a “revolution.” 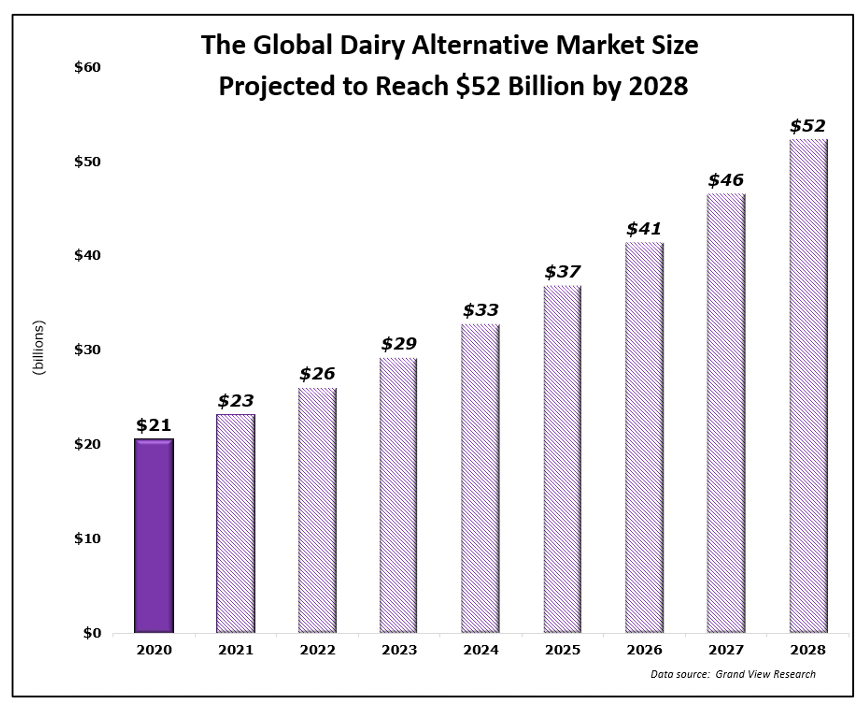 To put that in perspective, that’ll be about the same size as today’s whopping $57 billion energy drink market.3

This company, with its vegan “mylk” and yogurt business sits at the fulcrum of this sector, because its new, alternative dairy products are being met with high acclaim.

There’s concept and there is reality.

If you take a good look up and down the dairy aisle these days, you’ll get a clear picture what drove the forecast for the alternative dairy industry to more than double, to $58 billion over the next six years.

This rapidly transforming reality is what led Innova Marketing Research to declare that plant-based food and drink has reached “global phenomenon status.”12

It’s also what led the Specialty Food Association to call plant-based foods “more a movement than a trend.”  The SFA forecast the sector’s annual growth could be as high as 20% a year through 2024.13

Even multinational food processing conglomerate, Archer-Daniels-Midland is taking note. Its insiders are more than aware of the fast-growing acceptance of alternative dairy and meat products.

Just to give you an idea of the size and scale of this massive company that you’ve likely never heard of, Archer-Daniel-Midlands has a $33.8 billion market cap.14

“We are seeing a heightened demand for foods and beverages that support immune systems, enhance our mood and reduce our environmental impact, driven in part by emerging human tensions,” is how ADM’s President of Nutrition, Vince Macciocchi, put it.15

He went on to say that “This has provided a unique opportunity for brands to develop disruptive new products that will forever change the way we eat and drink.”

“It’s going to be a year of innovation, marked by significant breakthroughs in nutrition,” he said.16

This is the movement, the unexpected mega trend, that led this CEO to found this company when a family health tragedy drove them to seek healthier foods.

They turned their backs on Silicon Valley careers to launch this company after a breakthrough led them to create the world’s first vegan lassi.

Lassi is a yogurt drink. It’s big in Asia and some people consider it India’s national drink. But it’s also quickly gaining popularity in North America.

That’s a big market for a hyper-specialty drink.

It’s the type of market where a new award-winning product could easily and quickly scarf up significant market share. Which is exactly what is now happening with this company’s alt-dairy lassi, made from a novel, multi-plant-based blend.

The lassi landed them awards such as VegExpo’s Product of the Year 2019 award and a “Clean Choice Award” by Cleaneating Magazine in 2021.

Ultimately, it was the widescale attention this company’s lassi product received and it’s loyal, fast-growing customer-base that got the company’s products in Whole Foods.

Long considered the preeminent resource for a healthy lifestyle, getting a product on Whole Foods shelves is a big deal.

And that move opened the door for this company to sell mylk, creamer and plant-based yogurt at the major retailer as well.

Like its dairy-made cousin, this company’s lassi has 10 billion probiotics per cup to promote good gut health.

Probiotics are the number one reason people drink lassi – as well as eat yogurt – and 10 billion is an excellent number by industry standards.

A well-established health trend, the probiotics market got an unanticipated boost the past two years because of the critical role they play in supporting immune function.

Renewed Focus On Health Is Accelerating This Trend

In fact, a survey conducted by the Natural Marketing Institute in May 2020, found the number of U.S. consumers taking probiotics surged by 66% in 2020.19

As is evidenced in this company’s probiotic-rich lassi, the lines are blurring between the supplement and grocery aisles.

Moreover, Grand View Research found that a dominating 79% of the $55 billion probiotics market was made up of probiotic food and beverages.23

A key fact that isn’t lost on this company’s investors.

That’s doubly true when you consider that Plant-based food and drink are now so hot that in terms of household penetration their reach goes into 40% of North American homes, according to Information Resources Inc.24

This company’s award winning lassi is, frankly, a specialty product.

But it is a good introduction for investors as far as the concept behind the opportunity found in this company.

Big Flavor With A Small Footprint

The company also makes a highly regarded coffee creamer in a number of flavors, as well as a cashew-based alternative milk.

Honestly, alternative dairy milk is a decades old trend, mainly dominated by soy, rice, or almond products.  But according to a CNN report, there is certainly room to gain market share for alternative milk that tastes like real cow’s milk.29

And while not currently one of the more common alternative-dairy sources, cashews seem to be an ideal candidate.

WebMD reports that “cashew milk is an excellent middle ground, providing a low-calorie option while delivering a creamier consistency than other nut milks…

“It’s thick texture makes it an excellent option for drinking or enjoying in cereal. It can also be used in baking or for a variety of other purposes.”30

Making milk from cashews is not a complicated process.  Relatively easy to grow, newly planted cashew trees can be ready to move into production after only three years. From there, cashews take only two months to mature towards harvest once the fruit has set31.

It doesn’t require a huge investment, or ungodly amounts of water irrigated into drought-laden California deserts, as is the case with almonds.

Compared to a pound of almonds, which require an average of over 900 gallons of water to produce, cashews require only 180 gallons32.

While still water-intensive, cashews are also mainly grown in areas of the world that have natural, consistent rainfall.  That means they maintain a significantly smaller footprint than their more common counterpart.

The Right Products At The Right Time

It’s crystal clear that the plant-based “dairy” trend is just gearing up.

That makes this the perfect moment for this company to expand its product line to markets across North America.

After all, the company already has its foot in the door at the temple of the vegan movement — Whole Foods.

And from a production standpoint, the news couldn’t be better.  This company is set to meet this increase in demand as they prepare to move into a state-of-the-art facility that’s ready to roll.

Best of all – their new 25,000 square foot lab, processing, and distribution center is already GMP-certified. That means the facility’s clean rooms and processing center have been licensed for the highest standards. Standards fitting of the organic designation’s stringent guidelines.

Plus, this company’s new home could set its output on a stratospheric course by immediately increasing yogurt production capacity from less than 100,000 liters a year to at least 2.5 million liters.

By late 2022, expansion plans call for the facility to produce up to 15 million liters a year.

The Chief Executive Officer brings an engineer’s point of view to this company’s product development process.

The CEO is a former web technology expert in multiple Silicon Valley companies, including time as a software engineer at ecommerce giant Ebay.com.

He holds a Master’s degree from Northwestern Polytechnic University, is a Microsoft Certified Technology Specialist, and is an Award-winning vegan entrepreneur with certification in Plant-based Nutrition. He’s the heart of the idea that created this company.

It’s often said that Director of Product Innovation is this company’s spirit and soul.

She turned her back on Silicon Valley and is now a respected and award-winning serial vegan entrepreneur. She too holds a Master’s degree of Computer Science from Northwestern Polytechnic University.

In a world of AI and machine learning, she uses her well-honed analytical brain to mastermind and develop this company’s innovative product line.

There are likely a slew of happy investors who hold this company’s Director and Advisor in high regard.

A vegan entrepreneur and impact investor, she is a Founding Director and creator of the U.S. Vegan Climate Index ETF (VEGN).

She spent time as a Founding Director of Beyond Animal, a platform to accelerate growth of the vegan economy. She is also the former head of derivative marketing at UBS, an investment bank in the U.K.

This company’s President is anything but the cliched notion of a buttoned-down CPA.

He’s won a serious reputation in vegan corporate circles as a consultant at Lush Cosmetics, which is a famous handmade vegan cosmetics brand.

He’s also President of LucPrise International, which is a management consulting firm that advises companies through each stage of their growth. Strategist of Uni Express, a leading last mile delivery and fulfillment platform for ecommerce.

He’s a CPA who holds certification in Plant-Based Nutrition.

You can have the world’s best vegan alternative dairy products but they’re not worth a dime if you can’t get them stocked on store shelves.

That’s where this company’s Co-Founder and Chief Revenue Officer comes in.

It’s his hustle that won this company shelf space in more than 100 retail channels, which include well-known chains such as Whole Foods and Choices Market.

This company is home to a highly educated team and heis no exception. He holds a Master’s degree of Commerce, a Bachelor of Advanced Accounting degree from Sardar Patel University, and a certificate in Scaling a Food Business from the University of British Columbia.

Such a superior team is, however, but one of the…

The world is going green.

The kids are taking over.

And their grandparents, with aged immune systems, are gobbling probiotics.

Talk to your broker or adviser about this trend… it’s likely they’ll show you the same research you’ve just read here.

Even if you roll your eyes at all this “hippie stuff,” one high-flying stock from this sector could keep you in cheeseburgers for life.

A well-run company with timely products, such as this one could very well be that stock.