“In markets like technology, intellectual property (IP) is pretty well understood. Create a unique invention, patent it, and then enforce it against anyone who tries to copy you. In the nascent cannabis industry, IP is critical for creating true differentiation between companies.” – Kevin Murphy, Founder of Acreage Holdings

The multi-billion-dollar cannabis industry continues to evolve, and M&A activity is picking up again as large, multinational companies are breaking into the space, targeting companies with validated intellectual property. 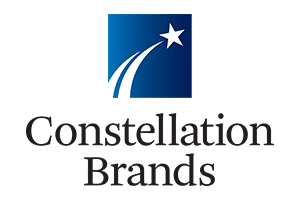 Multinational corporations will continue to enter the industry – in federally legal jurisdictions – hoping to dominate the global cannabis market with THC and CBD infused products.

Nextleaf operates in Canada, a federally legal jurisdiction where patent rights can be both enforced and leveraged over their 20-year lifespan.

With this movement, expert analysts believe it will be the companies with patented intellectual property that come out on top. This is why – until cannabis is no longer listed as a Schedule I drug on the Controlled Substance Act across the U.S. – these conglomerates will continue to invest in Canadian companies where cannabis is federally legal. In these jurisdictions, patent rights can be both enforced and leveraged as a competitive edge in the industry over the patent’s 20-year life.

The landgrab to secure cannabis patents has already started. Companies that leverage their technologies developed through their IP by generating revenue via licensing and monetizing that IP, will have a distinct advantage as other jurisdictions, like the U.S. and Mexico, take steps toward federal legalization.

Canopy Growth – the world’s largest cannabis company – and their acquisition of a small Colorado-based hemp research company, Ebbu LLC., is a prime example and illustrates the degree of difficulty in turning IP into issued patents.

The difficulties Ebbu has faced in securing patents point to a broader issue in the pot sector, where many companies tout their intellectual property, but few have successfully obtained exclusive rights to their inventions.”  – Financial Post

Nextleaf (OTCQB: OILFFOTCQB: OILFF, CSE: OILSCSE: OILS) has a 100% success rate obtaining issued patents from its pending patent applications, compared to averages of less than 50% for life science companies. The company’s intellectual property portfolio ballooned to over 60 issued patents and over 50 pending patents. Nextleaf holds patents in the United States, Canada, Mexico, Europe, Australia, New Zealand, Columbia, Brazil, and Asia covering one of the most efficient methods for producing high-purity THC and CBD distillated oils. Mexico has approved an adult-use bill that, once signed, will make it the largest legal cannabis jurisdiction in the world. Nextleaf trails only GW Pharmaceuticals (NASDAQ: GWPH) for the second most patents owned in Mexico.

The lawsuit illustrates the value of intellectual property in cannabis. With the U.S. moving towards federal legalization of weed, experts believe U.S. patents will become as integral to the cannabis industry, as they are to the tech industry. This lawsuit is good news for Nextleaf (OTCQB: OILFFOTCQB: OILFF, CSE: OILSCSE: OILS) , which owns the 2nd most cannabis extraction patents after Canopy Growth.

We expect M&A transactions in the industry, involving IP-rich companies to heat up in 2021; validated technology that can be immediately commercialized will be essential as large markets like U.S. and Mexico federally legalize.

Nextleaf Solutions (OTCQB: OILFFOTCQB: OILFF, CSE: OILSCSE: OILS) has positioned itself to be appealing to suitors by focusing on IP that can be, or already is, commercialized. It has also proactively adopted a shareholder rights plan, otherwise known as a “poison pill”, intended to ward off hostile take-over bids, and to maximize shareholder value if a take-over bid is made.

Nextleaf’s owns 12 U.S. patents featuring two high-profile patents around the production of THC and CBD prodrugs known respectively as THC-O-Acetate and CBD-O-Acetate. The patents issued in the United States and Canada enables the standardization of a more potent analog of THC and CBD, an alternative option to experience the unique medicinal benefits associated with targeted drug delivery. The Canadian patent represents the best opportunity with the fewest barriers to entry for pharmaceutical firms, but the U.S. patent may unlock their potential to become a billion-dollar business.

The company has already announced a deal to license a selection of non-core patents to a company selling products globally.

Outside of generating revenue from licensing IP, since their facility was commissioned in May, Nextleaf (OTCQB: OILFFOTCQB: OILFF, CSE: OILSCSE: OILS) has contracted over 30 metric tons of cannabis biomass to be extracted into THC and CBD distilled oils, which has the potential to generate up to $30MM+ CAD in gross revenue for Nextleaf over the next 12 months. Automation allows the company to increase or decrease production at the cannabis refinery to meet the demand of the wholesale market for THC and CBD oils and extracts.

Nextleaf has taken an asset light, IP heavy, focused approach. They have added supply and several downstream partners through bulk extraction and tolling agreements. These downstream revenue deals further validate Nextleaf’s technology and investment in innovation that will allow OILS to achieve and maintain profitability in the near term while other extractors struggle to compete on value as the price of cannabis commoditizes.

Currently, most cannabis oils used to infuse edibles, beverages, topicals and other non-smokable forms of cannabis is extracted using off the shelf, small-scale Co2 extraction equipment.

The two primary problems for cannabis and hemp processors that rely on Co2 extraction are:

Nextleaf’s patented technology and economies of scale rely on automation that is non existent in off the shelf technology like Co2 machines or other alcohol extraction methods. This advantage enables the production of a truly standardized, high purity distillate at a fraction of the cost with a fraction of the operating expenses. 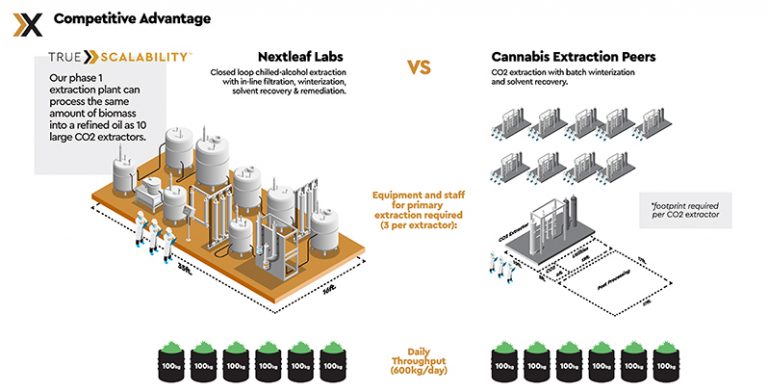 The largest cannabis companies in the world are “right sizing”. The industry is pivoting from the vertically integrated business model to a more sustainable approach featured in most established industries. Example: Coca-Cola does not grow its own sugarcane; it purchases the ingredient from a supplier.

A focus on one part of the supply chain, backed by their automated, closed loop extraction plant, capable of turning even failed crops of cannabis or hemp into a standardized molecule (the ingredient), manufactured in a way that each product is dosed in a repeatable fashion for standardization, is what has landed the company on many analyst watchlists. 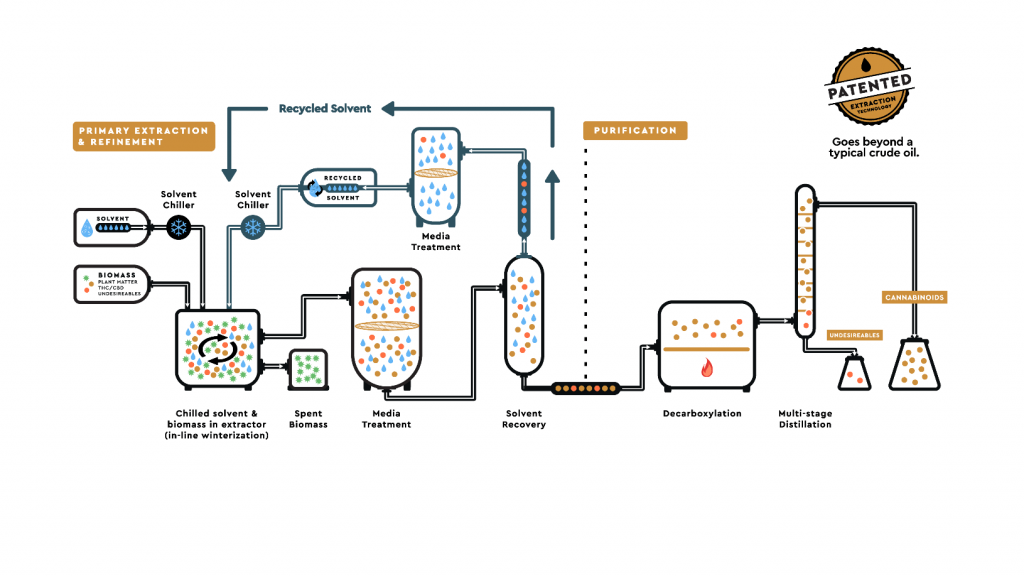 Protecting the process of producing a high-purity, cannabinoid-rich distillate is the first step, but developing and protecting formulations for THC and CBD products is just as important.

“Growing in a greenhouse to sell a beautiful dried flower is great. Dried flower sales will always be a core part of any market. But efficient patented extraction technology and put into IP-protected delivery formats like beverages or vape products is even better.” – Mark Zekulin, Co-Founder, Canopy Growth

Cannabis edibles and beverages found on shelves today have issues with bad taste and slow onset time. In some cases, feeling the effects of these products can take up to two hours.

A prime example of the difficulties found in properly standardizing, dosing, and formulating infused products was found by industry giants, Constellation Brands and Canopy Growth. Even with seemingly endless resources at their disposal, Canopy Growth’s beverage launch was delayed due to challenges with their IP/technology.

To combat one of the industry’s toughest challenges around odor, taste, and onset time, Nextleaf acquired a water-soluble cannabinoid formulation which reduces onset time to 10 minutes.

Why Canadian extractors with IP are the best cannabis stocks.

The largest cannabis markets in the world are yet to legalize but if the recent announcement of Mexico’s bill to legalize recreational cannabis is any indication, it’s not a question of if markets like the U.S. and Europe legalize, instead it’s a question of when.

The recent election in the U.S. suggests that this no longer a bipartisan issue as many traditionally conservative states voted to legalize cannabis. Furthermore, the U.S. House of Representatives passed the MORE Act on Dec 4, 2020 to comprehensively reform U.S. federal cannabis laws. The House approving the bill is a major step in North America’s largest market. Lastly, on Dec 2nd, 2020 the United Nations approved a recommendation by the World Health Organization (WHO) to reschedule cannabis. As a result, the UN greenlighted medicinal cannabis and the European Commission announced CBD would not be regulated as a narcotic. 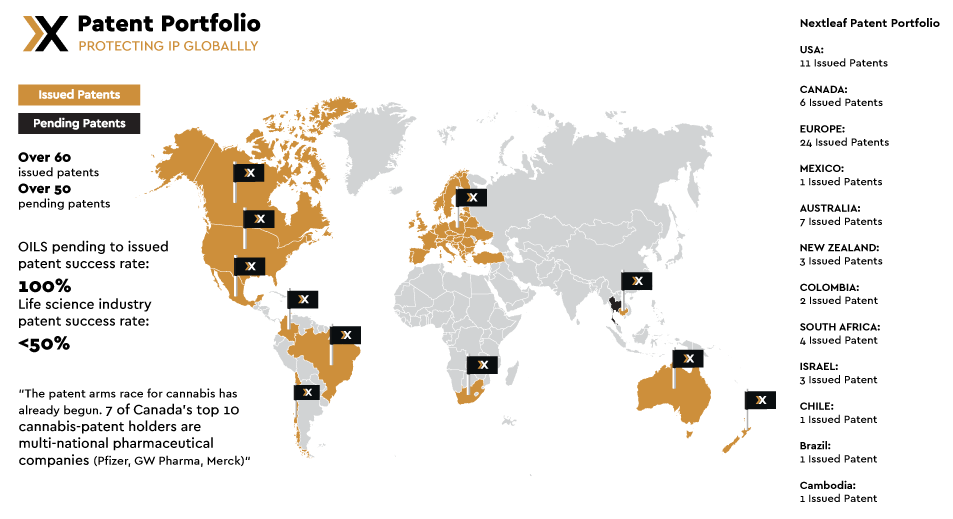 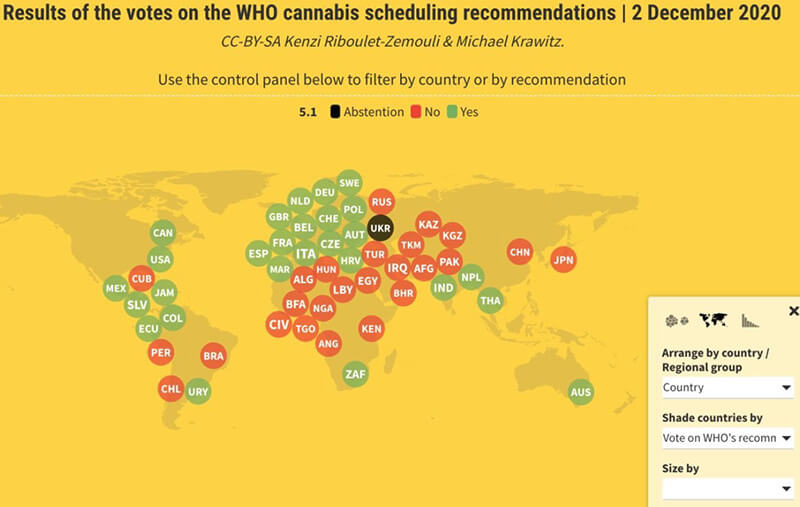 Nextleaf Solutions has outperformed the worlds largest companies when it comes to developing issued patents and intellectual property and is positioned to validate its I.P. through the Canadian B2B market. Doing so before the U.S. is a federally legal jurisdiction is an advantageous strategy to attract large multinational corporations waiting for that specific catalyst and is a key driver of market cap in the next oil boom!

Visit nextleafsolutions.com to keep up to date on corporate news and follow “OILS” across social media platforms.

SHARE OWNERSHIP. The Publisher does not own any shares of any profiled company and has no information concerning share ownership by others of any profiled company. The Publisher cautions readers to beware that third parties, profiled companies, and/or their affiliates may liquidate shares of the profiled companies at any time, including at or near the time you read the articles on this website and this has the potential to hurt share prices. Frequently companies profiled in such articles experience a large increase in volume and share price during the course of investor awareness marketing, which often ends as soon as the investor awareness marketing ceases.

INDEMNIFICATION/RELEASE OF LIABILITY. By reading articles on this website, you acknowledge that you have read and understood this disclaimer, and further that to the greatest extent permitted under law, you release the Publisher, its affiliates, assigns and successors from any and all liability, damages, and injury from articles appearing on this website. You further warrant that you are solely responsible for any financial outcome that may come from your investment decisions.

LINKS TO THIRD PARTY WEBSITES. This website enables users to link to external websites not under the control of The Publisher. The Publisher has no control over the nature, content, and availability of those sites. The inclusion of any links is not intended as, and should not be construed as, a recommendation or endorsement of the content or views expressed on such external websites. The Publisher expressly disclaims any representation concerning the quality, safety, suitability, or reliability of any external websites and the content and materials contained in them. It is important for users to take necessary precautions, especially to ensure appropriate safety.

INTELLECTUAL PROPERTY. The Market Tactic is the Publisher’s trademark. All other trademarks used in this communication are the property of their respective trademark holders.  The Publisher is not affiliated, connected, or associated with, and is not sponsored, approved, or originated by, the trademark holders unless otherwise stated. No claim is made by the Publisher to any rights in any third-party trademarks.

I Got High For Science: Inside A Human Trial With Cannabis Processor Nextleaf
(Mar 30, 2021)

IP Strategy And Cannabis: How Canada’s Nextleaf Is Monetizing Its Patents
(Jun 9, 2021)