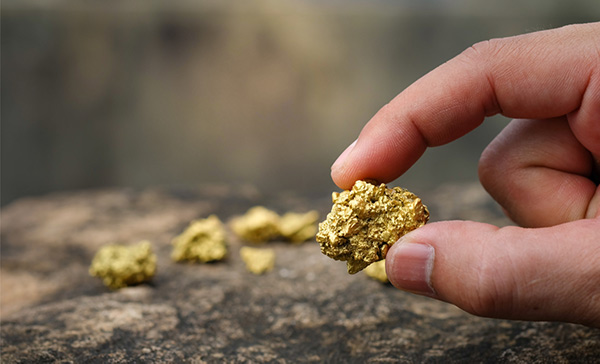 Now the cycle turns to gold. Smart investors will too…

The U.S. National Bureau of Economic Research (NBER) has ruled:

The longest economic expansion in history is officially over.

On June 8, NBER announced that economic expansion peaked in February 2020, and began its decline into recession.

Even Warren Buffett, a well-known gold naysayer, changed his tune and became a gold yay-sayer this past August, saying he’s worried the economy is topped out.

Gold is the proverbial Play of the Day.

Because you definitely don’t want to miss out on what could be the top performing asset of at least the next few years.

The #1 opportunity in today’s market.

It’s an asset that’s being propelled by a “perfect storm” of powerful forces, including:

You’ll discover all three of these great profit opportunities in a moment. But first, here’s why those who think gold’s recent pullback is signaling the end are wrong.

Instead, this is just the beginning.

In February, just as the economic expansion was coming to an end, analysts started sounding their alert.

Three months later, in May, Liechtenstein-based asset management company Incrementum AG made the long-term case for gold in a massive 420-page report titled “The Dawning of a Golden Decade.”

If you’re not a dedicated precious metals investor, it might surprise you to know just how long these bulls can last, and how high profits can go.

Gold bull markets return an average of about 440% and last about seven years.5

That holds true for every gold bull market of the last 80 years.

Muschinski’s research also shows that 80% of the gains will occur in the last 20% of a gold bull market’s duration.

That gives you plenty of time to choose your best position for profiting.
From the time the cycle changed in February until gold hit its high six months later in August, gold soared 33%.

Since then gold has taken a breather, and some investors are wondering if they missed the boat.

Instead, the pullback gives you the perfect opportunity before gold shoots higher once more in the next leg up.

That principle has held true in every gold boom dating back to at least the 1970s.

In fact, a rule of thumb used by gold industry insiders is that a 1% increase in the price of gold leads to a 3% to 10% increase in gold stock returns, according to study from the Centre for Asset Management Research at City University London.7

Which is one of the reasons why Warren Buffett invested more than half a billion dollars in one top 3 producer.

But there’s something else you should know about stocks in general and gold stocks in particular.

If Warren Buffett had the freedom to choose the gold stocks he really wanted, he would not have bought a major producer.

Buffett famously once said he could earn returns of 50% a year if he could buy small cap companies.

But with his company, Berkshire Hathaway, sporting a market cap of $509 billion, small stocks just wouldn’t move the needle.

And so Buffett can’t take advantage of the second part of the law of gold price leverage, which is that:

Major mining companies can only grow incrementally, and rising resource prices don’t do much to sway their valuations or stocks.

In fact, during the last precious metals bull market it wasn’t the majors that built the biggest investor gains.

Of course, it doesn’t happen for every junior miner, which is why its crucial to do a real evaluation to show exactly how to identify a first-rate junior gold stock.

And what better stock to evaluate than:

The little-known, up-and-coming junior that beat out industry giants for one of the “world’s last great gold properties”

If you’re interested in building long-term wealth, real wealth, look no further than the gold junior that is already standing among the giants of the industry:

From its stellar management team to its shocking selection as the grantee of seven potentially world-class gold projects, this junior is aligned for success.

By relying on the stellar reputation and industry alliances of its management team, the company has been granted control of one of the most highly-sought mining concessions in the world.

Which sets them on a course to potentially become one of the brightest stars in the gold mining universe in a very short time.

It’s not impossible that a junior mineral resource company could score some of the world’s last remaining underdeveloped gold properties.

But it’s rare, and even more so when those properties sit squarely between and shoulder-to-shoulder with high-value operations owned by two of the world’s biggest gold producers.

And especially since the four projects it nabbed were just about the last high-potential properties left in the region.

The Canadian company set its sites on the Maricunga Gold Belt of northern Chile, an area that is becoming one of the hottest targets for major producers looking to replenish their rapidly-declining reserves.

“One of the world’s largest undeveloped gold districts.”

The resource-rich region has only been the focus of modern mining efforts since about 2017.

In May of that year, gold analyst King announced that “big news just broke in the gold sector.”

A “new gold-bearing mineral district called Maricunga” was starting to see activity, he wrote, “and it’s a game-changer.”

Top mining companies swooped in for a land grab, putting “a world-class level of new gold-silver-copper resource onto the global development table – tens of millions of ounces of gold-silver, and billions of pounds of copper.”

And so within a few short years, nearly every inch of that vast gold-rich land was brought into the reserves of the mega-producers.

After spending a couple of years mapping and analyzing all of the country’s mineral regions, CORFO identified the areas of utmost potential.

Five stood out as superior to all others.

That this little company was awarded all five is attributable to one overriding quality:

How it all unfolded is a textbook lesson in the value of reputation and expertise.

An army of geologists deployed around the country, including one division that headed north to the rich region of the Maricunga Gold Belt.

That group identified a whopping 403 potential prospects, and then began the ranking process to determine which ones had the potential to become world-class producing mines.

Their first cut narrowed the field to 57…

…their exacting standards resulted in five properties they rated as having world class potential.

And they weren’t going to hand such valuable assets out to just anyone.

It had to be a company they could trust to see a project through to the end.

A company that had the team that could make it happen and do it within a reasonable timeframe, without endless delays to drum up funding or chase down permits and approvals.

In other words, all the qualities necessary to help ensure the successful development of these five valuable mining concessions.

All are situated squarely at the heart of the Maricunga Gold Belt, and all are within geological formations identical to those of nearby million-ounce deposits.

There might not be a better opportunity for investors today, click here to learn the name of this little known mining junior.